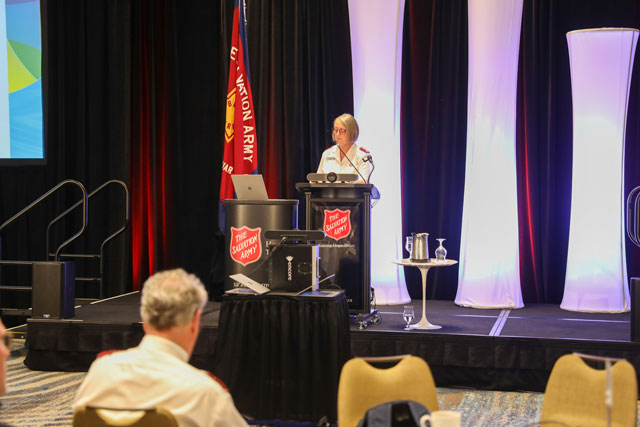 The day began with prayer in recognition that 30 September is the national day for truth and reconciliation in Canada, with Canadian officers showing solidarity by wearing orange tee-shirts. The remainder of the day was packed with a series of high-level presentations and breakout discussions.

Commissioner Lee Graves, International Secretary for Business Administration, International Headquarters (IHQ), started his presentation by reminding delegates of the purpose of the business administration function and highlighting the need to train key personnel for the future. He said, ‘From a business practice perspective, we need your help in identifying people who will be able to fulfil finance roles.’

Looking to the future, he said, ‘In 2023 we will be hosting the international finance conference at Sunbury Court. The purpose of the conference is to assist IHQ leadership in the development of a Kingdom-centred financial strategy and to create a forum for exploring best practice. We have representation from each of the zones. Delegates will speak on behalf of territories to help us.’

Commissioner Graves reminded delegates of key achievements, listing IFAS accounting standards and e-learning platform, NetSuite implementation, and the successful implementation of Office 365. He also spoke about the need for the Retired Officers Allowance Scheme which is to ‘relieve the poverty or financial hardship of retired officers by funding provision.’

All zones and all territories, commands and regions have the opportunity to contribute to the Self-denial Fund, and Commissioner Graves thanked those who had been able to make contributions. He also highlighted the 25 years of Others, which he described as ‘a beautiful social enterprise’.

Colonel Suzanne Fincham gave a high-level review of Governance to leaders. She said, ‘The hallmark of The Salvation Army is integrated mission, and Salvationists are called to minister to the whole person, the so-called, ‘Soup, soap and salvation’. Governance is not about the mechanics of how we run the movement, it is about this being done through the Body of Christ. Good governance is of foundational importance. Accountability is embedded in the systems and practices of The Salvation Army.’

Outlining the essential need for personal visits, Colonel Fincham also spoke of strengthening the mandate of the IHQ governance team and ensuring that territories are well served by one-to-one and bespoke training sessions. She also described the work being done to roll out an online course in six modules and reminded people of the resources and protocols of governance principles. 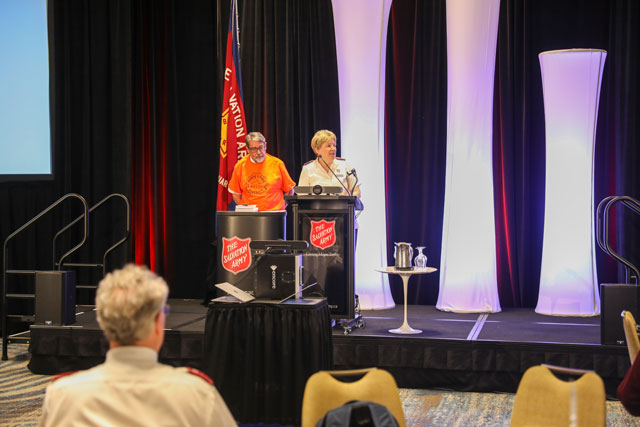 Colonel Julie Forrest updated delegates on the work of the symposium on human sexuality. Every territory, command and region nominated a delegate. Fifty-nine territories, commands and regions were represented. Colonel Forrest said, ‘We were able to gather as a truly international family, praying and growing together. We had soldiers, cadets and officers of all ranks and an age range of 18 to 65 and over. This was a ground-breaking event as we invested time in speaking about human sexuality. We came together as a Christian family to have respectful conversations and at the end of the week we asked for feedback. Ninety-seven per cent of delegates said they felt comfortable sharing openly with others and 99 per cent said they felt that their opinions were valued and respected by their group.’

Highlighting particular sessions, Colonel Forrest concluded by saying that there will be serious consequences of not addressing the issues of human sexuality. She said, ‘These issues will be considered at the General’s Council and I hope we can have respectful conversations about encouraging the wider use of the Let’s Talk About… documents.’

Lieut-Colonel Karen Shakespeare reminded delegates of the principal purpose of the 17 members of the International Theological Council (ITC) which is: ‘To serve the General and The Salvation Army by being faithful custodians of the Army doctrinal positions.’

Outlining the challenges on finding council members, she said, ‘The timely identification of Salvation Army theologians is essential if not always easy. The profile of the people we need includes (amongst other qualities) the need for them to be soldiers or officers and to demonstrate a solid theological understanding. They must be able to contribute from the perspective of their territory or zone and be fluent in English.’

The work of the ITC is varied and over recent years includes publications on the theology of ordination and commissioning, the theology of education and the theology of marriage. Other significant relationships include working with the International Ecumenical Relations and Spiritual Life Development teams, and participation in World Council of Churches events. ITC members also author publications like Called to be a Soldier and articles for publications such as The Officer. Colonel (Dr) Wendy Swan has also written ‘A theology of Salvation Army Leadership’.

Colonel Ian Swan began the update on the International Social Justice Commission (ISJC) stating: ‘We all agree that the world is not the world as it should be. Salvationists’ interaction must be deeply rooted in Scripture and the life and ministry of the Lord Jesus. It was the desire of Evangeline Booth that The Salvation Army should not only have a seat at the table but also a voice of influence. The ISJC has now been operative for 15 years. Our role is to; advocate for the world’s poor and oppressed, be a recognised centre of research, work with a strategic approach to advocacy and research, collaborate to advance the cause of biblical justice, work with Salvation Army policies, to work with compassion and inspire others to do likewise and to review our purpose in order to retain biblical stewardship and proclamation of the gospel. We are at the United Nations (UN) to represent you.’

Colonel Wendy Swan asked, ‘Post COVID-19 how do we build back better and not just return to the way it was before? We need to move forward with more collaboration and better communication, we need to renew internal and external partnerships and continue our commitment to the UN. We are better together!’

Colonel Ian Swan concluded the presentation, saying: ‘The General has invited us to conduct a review of the ISJC. We were at the table and now we have a voice – the ISJC is the Army’s conduit. It’s a privilege to join this team and we request your prayers for discernment and wisdom.’

All presentations were received with warm appreciation and the packed day for the international leaders ended with further group discussion and feedback.