Announcement: The Chief of the Staff

You will understand that within a very short time of accepting my election to the office of General, I began to give serious thought to whom I might ask to work alongside me as the Chief of the Staff.

After several days of prayer, reflection and wide consultation with a number of senior leaders, I have decided to appoint Commissioner William Roberts as Chief of the Staff, effective 1 October 2013. Commissioner Nancy Roberts is appointed as World Secretary for Women’s Ministries. 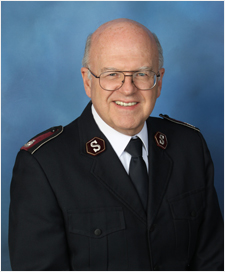 Commissioner William Roberts returns to International Headquarters with a wealth of experience and knowledge of the international Army. After initial appointments in corps ministry, he served in divisional finance appointments for a number of years, before being appointed as a divisional secretary in two divisions and then as divisional commander in two divisions. Commissioner Nancy Roberts shared those years of ministry, involving herself also in the leadership of the League of Mercy and the Home League, and as Social Concerns (Moral and Ethical Issues) Secretary.

December 2001 saw Commissioners Roberts move to the southern part of the Americas and Caribbean zone, when they were appointed respectively as Territorial Commander and Territorial President of Women’s Organizations, South America East Territory. Four years later the commissioners reported for duty at International Headquarters – Commissioner William Roberts as International Secretary for Business Administration and Commissioner Nancy Roberts as IHQ Chaplain and Secretary for IHQ Staff Development. In March 2008 the commissioners became the first territorial leaders of the newly formed Kenya West Territory where their leadership and ministry made a deep impact on Salvationists in the western part of Kenya. From there they returned to their native USA as the national leaders.

Commissioner William Roberts is a leader of varied expertise and wide knowledge. As well as having a Bachelor's degree in Business Administration and a Master's degree in Religious Studies, the commissioner has interested himself in minority ministries, cross-cultural ministries, leader development, evangelism and church growth, and social service.

With such a background, and a commendable record of service in North America, South America, Africa and at IHQ, I am confident that the commissioner is more than well prepared for the task to which he is now appointed, as is Commissioner Nancy Roberts who will work alongside Commissioner Silvia Cox in the interests of Women’s Ministries around the world.

Please join me in praying God’s rich blessing upon Commissioners Roberts as they take up their significant leadership roles at the heart of our Army.