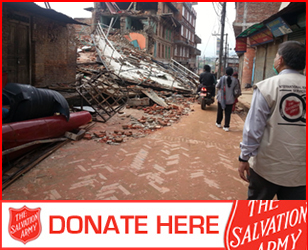 A magnitude 7.8 earthquake struck Nepal early on Saturday 25 April 2015, devastating the capital region of Kathmandu. Reports suggest that more than 6,600 people have died and communities and businesses have been destroyed. This is the worst earthquake to hit the area in 81 years.

The Salvation Army has been at work in Nepal since 2009 and is responding to the urgent needs - currently the provision of shelter and clean water. But we need your help.

International Salvation Army leader General André Cox encourages Salvationists and friends around the world to support this important appeal for funds: 'The Salvation Army is present, we are known, and we have a responsibility to step up and support the relief and rebuilding efforts.'

Watch this video from Salvation Army volunteer Michael Andrew, who was filming while walking the mountain path to remote communities near the epicentre of the second major earthquake which struck near Mount Everest on 12 May

24 May 2015
Blog from IHQ Communications team in Kathmandu