Ahead of general elections in Kenya this August, The Salvation Army has been putting in place peacemaking plans to avoid a repeat of the terrible violence and bloodshed that followed the 2007 elections. One of the main elements in this plan is the release of this specially-written song – 'Kenya, My Home' – as part of a wide-ranging joint venture organised by The Salvation Army's two Kenya territories (Kenya East and Kenya West) in partnership with International Development Services and International Emergency Services (both based at International Headquarters in London).

The song for peace has been written by children across the country. Set to an African beat and beginning with rhythmic sounds made by everyday items, 'Kenya My Home' uses different tribal languages and has contributions from children who are blind, others who live on the streets, some who are Christians, some who are Muslims, some at school and some living without families to show through words and music that ‘everyone is somebody’ and ‘Kenya is home’.

People across Kenya and beyond are being encouraged to share the song and its accompanying video, which shows a powerful message of peace and unity, on social media using the hashtag #KenyaMyHome, spreading the message that choosing peace is in everyone's best interest. 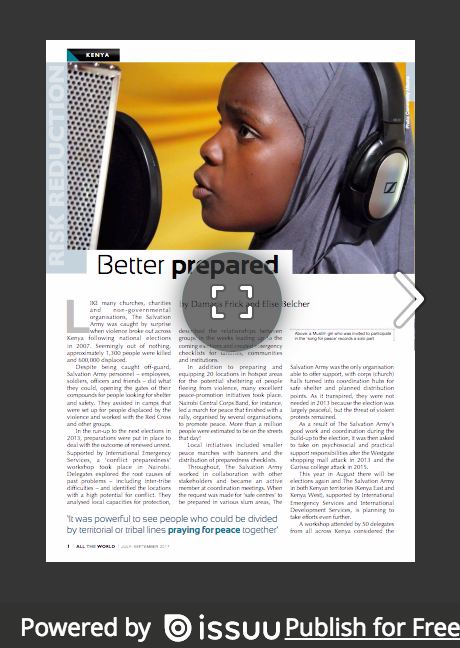