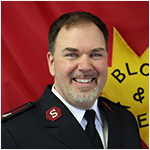 Bobby Westmoreland was born in Hattiesburg, Mississippi, and got to know The Salvation Army as a child, as his family was in crisis and received assistance, leading to Bobby becoming a soldier in the Army. He graduated from The University of Southern Mississippi with a Bachelor Science in Business Administration majoring in Human Resources with a minor in music education, and went straight into The Salvation Army training college in Atlanta, GA, being commissioned in 1996 to Natchez, MS, where he served as the corps officer for five years.

In 2001 he was appointed to International Headquarters as Assistant Under Secretary to the Americas and Caribbean Zone, which gave him the opportunity to lead the first Latin American Mission Team to Ecuador. He married Anne Edelbo (of Denmark) in 2002, and in 2003 received a new appointment to the Territorial Youth Department in Atlanta.

From 2005 they served as corps officers in Lawrenceville, Georgia, until they in 2010 were appointed to the Eastern Europe Territory, first as interim Regional Leaders in Georgia, and then as Divisional Leaders in Ukraine.

During this time Bobby received his Masters in International Development from Eastern University with residencies in Uganda, Africa. Having just returned to the USA Southern Territory upon completing their term overseas, the Westmorelands are currently serving in a temporary appointment as Divisional Youth Leaders in the North and South Carolina Division.

Bobby is passionate about God’s love, mercy and justice, and how it affects individual people and communities.