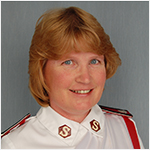 Marieke was born in the Netherlands, and emigrated to South Africa with her family when she was ten years old. She attended school in Johannesburg, and graduated from the University of Johannesburg with a BCur (Hons) in 1985.

She attended the South Rand Corps as a Junior Soldier, became a Senior Soldier in the Benoni Corps, and entered the Training College in Soweto in 1986, as part of the Messengers of Joy session of Cadets.

She married Alistair in 1987, and together they held various appointments as Corps Officers, Training Principal and Director of Personnel respectively, and Divisional Leaders of the Central Division, Southern Africa.

In addition, Marieke served as chair of the Moral and Social Issues Council, coordinator of the ROOTS conference in 2005 and 2007, and national coordinator of the anti-human trafficking task team in Southern Africa from 2009 until 2011.