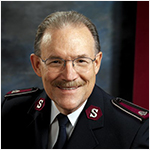 James Nauta began working as a layman with The Salvation Army following graduation from Asbury College in 1966. In 1972, he received a Masters of Social Work degree from Indiana University School of Social Service. He was admitted to the Academy of Certified Social Workers in November of 1978. In 1987, the Western Michigan unit of the National Association of Social Workers selected him as Social Worker of the Year.

In July 2003, James was appointed as Divisional Commander for the Western Michigan Northern Indiana Division of The Salvation Army, with headquarters in Grand Rapids, Michigan. In this capacity, he served as the administrative and ecclesiastical head of the Army’s work in 28 corps community centers and a variety of social service programs throughout the division.

In July 2008, James was appointed as Secretary for Personnel in the USA Central Territory, and promotion to the rank of Lieut-Colonel followed. In this appointment Lieut-Colonel Nauta was responsible for the care and oversight of personnel – officers and employees – serving throughout the Midwestern states.

Following retirement from active officer service in 2010, Lieut-Colonel Nauta has been serving as a Project Specialist Consultant for The Salvation Army’s Ray and Joan Kroc Corps Community Centers.

James Nauta is married to his wife Jan, who is also a retired Salvation Army officer. They currently reside in the Greenville/Belding area of West Michigan. They have three children and six very special grandchildren.