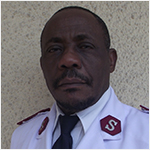 Lieut-Colonel Lucien Lamartinière is a Caribbean Territory officer, native of Haiti. He was born into a Baptist family. He met salvation when he was 25 years old. As The Salvation Army did not exist in his home town, on 10 October 1982, he started an outpost in his family living room which has now become now one of the biggest corps of the territory!

After leading that work for eight years, he entered the Caribbean Training College based in Kingston, Jamaica in September 1990. Following the first year, he and his wife were transferred to Canada to complete their officer training. They got commissioned in Toronto, on 20 June 1992, from the Followers of Jesus Session.

On commissioning, he was appointed successively as: corps officer of Montréal Northern Corps, Canada and Bermuda Territory 1992-1997 then transferred to the Caribbean Territory as Haiti Divisional Youth Secretary 1997-2003, Haiti Divisional Secretary 2003-2007, Haiti Divisional Commander 2007-2011. Currently, Lieut-Colonel Lamartinière is the Chief Secretary for the Democratic of Congo Territory since December 2011.