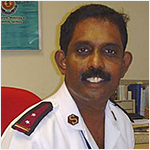 Hary Haran lived his early years of life as a Hindu. The sixth child in a family of eight, he witnessed his widowed mother struggling to supply their needs. However, he received a proper school and college education.

Hary Haran was an Air Material Specialist and trainer in the Republic of Singapore Air Force for 16 years before he gave up his career to serve in The Salvation Army. He was not yet a believer. In the year 1999, he accepted Christ as Lord of his life and became a soldier. The call to officership came four years later. Hary was the only cadet in the 2003 Preparers of the Way Session! In 2004, he was appointed to Singapore Central as assistant corps officer and also chaplain to a children’s home. Two years later, he became the territorial youth and candidates secretary and served for four and a half years. Presently he is the corps officer at Balestier. His portfolio also includes an outpost, Youth Development Centre and the Chairperson for Medical Fund Committee at The Salvation Army Nursing Home.

Hary, a single officer with numerous responsibilities, is no stranger to pain, stress or suffering himself but consistently demonstrates grace under pressure. His trenchant observations on the pains and aspirations of human life make him a compassionate, wise counsellor to many who have approached him over the years in the Lord’s ministry.

His primary passions include connecting the Word of God to the struggles of daily life, and the promotion of the discipline of spiritual friendship in the society.