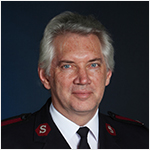 Major Brad Halse possesses degrees in Arts and Theology and has served as an officer within The Salvation Army for more than 30 years. During this time he has held appointments in Victoria, South Australia and Western Australia, covering diverse areas of service such as aged care, homeless youth, editorial, community and pastoral work, and senior administration.

His current role at Territorial Headquarters in Melbourne is as the Australia Southern Territory’s Manager of Government Relations.

Major Halse brings not only a very broad experience in varied fields of community service but also a longstanding and passionate commitment to social justice and the professional delivery of community and welfare services. He has represented The Salvation Army and the broader community on many Commonwealth and State Government advisory bodies and taskforces.

In recent years Major Halse has also played a significant role in the ongoing debate around responsible gambling and the efforts to implement significant political reform in this area of social policy. He is also strongly involved in the issues surrounding asylum seekers in Australia.