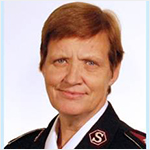 Commissioner Eva Marseille (née Larsen) comes out of the Copenhagen Temple Corps, Denmark, where her parents were local officers. After her secondary education she studied dentistry and qualified as a dental surgeon in 1975. In 1976 she married Gerrit Marseille, civil engineer and Salvationist from The Hague, Netherlands, and after a short time in Ribe, Denmark, they entered the International Training College in London as Joyful Evangelists (1977-1979).

After their first appointment as corps officers in Elburg, the Netherlands (1979-81), they spent 10 years in the Zaïre Republic (now Democratic Republic of Congo) as project officers. During this period Eva set up dental health clinics and integrated dental care in The Salvation Army’s primary health services.

When unrest broke out in September 1991, the family that now included three children, had to be repatriated to the Netherlands where two corps appointments followed, Spijkenisse corps and Utrecht Stichterskorps.

In 1997, Eva was appointed as Literary Secretary and Editor in her home territory of Denmark. The ministry journey took them back to Africa again in 2006, as Gerrit was appointed Financial Secretary in South Africa and Eva shared her time between the role as Editor, child sponsorship coordinator and secretary to the MASIC (Moral and Social Issues Council) including the initial response to Human Trafficking. After 18 intensive months in Johannesburg they were moved to Congo Brazzaville, on the other side of the Congo river from Zaïre. Here they spent three and a half year in the Congo as Chief Secretary and Territorial Secretary for Women’s Ministries before being appointed to IHQ in 2011 where they are today.

Eva is responsible for Mission Resources, under the Programme Resources department for which Gerrit is the International Secretary, and also Zonal Secretary for Women’s Ministries in the South Pacific East Asia Zone. Their grown-up children and five grandchildren are all living in Denmark.