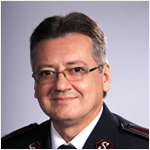 Commissioner Torben Eliasen is the International Secretary for the Americas & Caribbean Zone.

From Bosque in the Brazil Territory, he was commissioned as a Salvation Army officer in 1983 and was appointed initially to corps and prison chaplaincy roles.

In February 1995 he was appointed as the Public Relations, Youth and Candidates Secretary for the Brazil Territory, before becoming Divisional Commander two years later.

He became Chief Secretary in 2001, then moved to the Mozambique Command to take on the role of Officer Commanding. The work in Mozambique expanded to become a full territory, and Torben became Territorial Commander before being appointed to his current role in International Headquarters in July 2012. He currently oversees all Salvation Army ministry in the Americas and Caribbean zone.