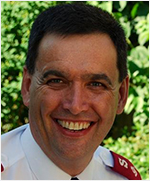 Dean graduated from University of Cape Town in 1985 before working in personnel management in South Africa during the turbulent industrial relations period from 1986 to 1990.

Dean was trained as a Salvation Army officer (1991 to 1993) and married Dr. Eirwen Lowther in 1993. They have led Salvation Army corps in England (Woodbridge and Rugby) and from 1996 to 2000 the Pallants served at Chikankata Mission Hospital, Zambia. Dean was Editor of the United Kingdom Territory weekly news magazine Salvationist from 2004 to 2007.

Since October 2007, Dean and Eirwen have been International Health Services Coordinators for Salvation Army health ministry around the world. Dean takes the lead in management and theological aspects of Salvation Army health services – Eirwen is responsible for the clinical aspects. In 2010, Dean was appointed Under Secretary for Programme Resources as an additional appointment.

Dean was appointed secretary of the International Moral and Social Issues Council in 2008. In 2013 he was appointed to chair a review of Salvation Army accountability and assessment systems to report to the General by mid-2014. He is chair of the working group of the One Army Impact Project and a member of the steering committee.

Educational background: Dean completed a doctorate in theology at King’s College London in 2010. His first book was published in 2011, Keeping Faith in Faith-Based Organisations – a practical theology of Salvation Army health ministry.

His primary passions include connecting the Word of God to the struggles of daily life, and the promotion of the discipline of spiritual friendship in the society.