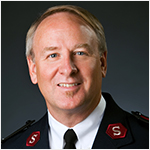 Major John Chamness is the Divisional Commander for The Salvation Army in the Hawaiian and Pacific Islands Division which includes Hawaii, Guam, Saipan, the Federated States of Micronesia and the Marshall Islands.

John has been serving as a Salvation Army officer for 24 years. Originally from Seattle, Washington, he is the son and grandson of Presbyterian pastors. John was first introduced to The Salvation Army while working in property management for an electrical contractor in Seattle, and was immediately drawn to the Army’s practical ministry.

John was commissioned in 1989 as a Salvation Army officer and received his first appointment to Hawaii, where he and his wife Lani were married. They served as Corps Officer in a variety of appointments in Hawaii including four years in the Marshall Islands and four years as Divisional Youth Secretaries.

Following 13 years in Hawaii, John and his family were transferred to the mainland where they served for ten years in the Northwest Division. Four years at divisional headquarters and six year leading the development of a Kroc Center in Cœur d’Alene, Idaho. This multifaceted $70 million recreational, educational and arts facility has become the standard by which all other Kroc Centers in the nation are measured. In its first year of operation alone, membership grew to 22,000.

John and Lani have been married for 23 years and they have three children – Lindsey, Mitchell and Camille.