Book review: To Seize This Day Of Salvation

by Paul A. Rader with Kay F. Rader (edited by Stephen Court) 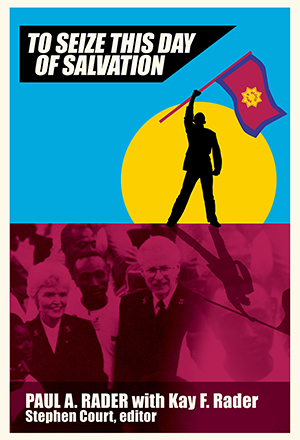 With inspiring writing designed to motivate us, General Paul A. Rader (Retired) and Commissioner Kay F. Rader urge the Army to immediate action with their ‘carpe diem’ call To Seize This Day of Salvation. Together, they have never played a waiting game. Their message means ‘now’, ‘today’, and pushes us to do it at this point. Then, they make clear the rationale of this goal of seizing this day of salvation.

Upon assuming command of the USA Western Territory in 1992, Paul Rader felt it necessary to write the framework of faith within which he was called to work and which defines his mission. How wonderful it was for officers and soldiers to hear the factors to which he held himself accountable. Under the title ‘This I Believe’ he articulated the belief system that guided his life and, thus, laid out criteria for individuals to use in examining their own belief system. What a way to begin. This framework of faith appears first in the book.

The first of 16 points in the Credo states: ‘I believe that in winning souls, the service of people and the building of the Army, our ultimate concern must be for the glorification of God. More important than doing the work of God is doing the will of God.’ In his second statement in the Credo he states: ‘I believe that our primary task is to lift up the Lord Jesus Christ, to glorify him, to proclaim him as our risen Lord and present, powerful Saviour. Christ is Head of his Church and Captain of his Army.’

In reading General Rader’s Credo, I couldn’t stop pondering what the factors might be in my own belief system. I have strong beliefs, but have never written them. I suspect I reveal much in my writing for the Army’s publications. Perhaps, you will wonder as well.

Each of his points began with ‘I believe …’. Some of the points in the Credo concern the Authority of Scripture, the Centrality of the Cross, the Nature of Salvation, The Power of the Spirit, World Evangelisation, Growth, the Value of Persons (mentioned by Commissioner Robert Street in the Foreword to this book), Integrity of the Family and several others.

The Raders have always encouraged active participation in the planning process for the accomplishment of the ‘mission’, and the book explains why this word takes on important meaning for them both. They continue to pursue the achievement of the Army’s reason for being. General Rader states succinctly: ‘I am not a mindless proponent of expansionism,’ but ‘… I am committed to strategic advance.’ We need ‘a new birth of evangelistic innovation and daring’.

I had the privilege of working under the Raders’ leadership during the planning of ‘Mission 2000’ in the USA Western Territory. Its boldness frightened some traditionalists, however it achieved great success in expanding the number of corps and modifying worship style to the 21st century.

In section 3, the reader finds important information relating to our ‘Wesleyan heritage’ and a chapter titled ‘Lest we Lose Our Legacy – the Place of Women in Salvation Army Ministry’.

Two inspiring and informative speeches to the High Council bookend this volume. The first, delivered in 1993, carries the identical title to this book: ‘To Seize This Day of Salvation.’ Beginning with quotes from 2 Corinthians 6:2 concerning a forward push relative to ‘now’ being the accepted time, Rader began detailing the daunting challenges and exciting opportunities the Army faced during that time. He deftly revealed his knowledge of the terrors and triumphs of every region of the world. From the Aids pandemic ‘sweeping like a plague though central Africa’ to the Middle East and its tribal difficulties. The then-Commissioner Paul Rader said to the High Council concerning other parts of the world: ‘I am committed to the intentional invasion of the King of Darkness’, and urged his listeners to ‘ hear anew the call of the streets and slums, the barrios and favelas, the highway and the hedges and the haunts of sin and shame’. Then, I imagine with power, he stated: ‘Our unity is our strength.’

At General Rader’s final visit to a High Council, he spent time expressing appreciation to the council for his opportunities of service, and for the wonderful assistance he had from those with whom he worked most closely. He reminded the membership that they were not representing anyone and their decisions were their own responsibilities. He then reported on progress on various international issues.

The book closes with ‘A call to Prayer from Lazarus’s Tomb’ wherein General Rader reports on his final visit with his father, Lieut-Colonel Lyell Rader, prior to his promotion to Glory. Lyell, a fantastic evangelist, gives Paul his orders and identifies subjects for prayer, the first being: ‘We need to pray for the purity of our movement.’ He continued: ‘Then we can pray for renewal and revival in our corps and among our people.’

This book is a valuable read for all people interested in the development of this Army of salvation. It spells out the Army’s history, and articulates clearly its goals of a world for God, the roles of women in ministry, the rationale of our commitment to the poor, the dissolute, ignored and forgotten, where ‘nobody ever knows your name’ (except, maybe, the War Cry salesperson).