What is The Salvation Army?

The Salvation Army is a Christian church which is commited to spreading the good news of Jesus Christ through both word and action. Because of this primary aim the Army shows practical concern and care for the needs of people regardless of race, creed, status, colour, sex or age. (More...)

How did the Salvation Army begin?

The Salvation Army’s founders, William and Catherine Booth, were Methodists and William was a minister in that denomination. They both believed that William was called by God to be an evangelist and they did not agree with the decision of Methodist officials that he should be confined to a local church situation.

So strongly did the Booths believe William should be an evangelist that he resigned from the Methodist ministry and they moved to London with their young family. After being invited by a group of Christians from a small mission to preach on the streets to the crowds thronging the Mile End in East London, William was sure he had found his destiny.

The group made William its leader, and became known as The East London Christian Mission. The Mission grew rapidly, its work spreading through Great Britain, resulting in its name being changed to The Christian Mission.

In 1878 the Mission’s name was changed once more — this time to The Salvation Army. Such a military name fired members’ imagination and enthusiasm, and uniforms were adopted and military terms given to aspects of worship, administration and practice.

While over the years the Army has adapted its military image to changing times, it still retains a distinctive uniform and structure to enable it more effectively to combat wrong and make known the good news of Jesus.


What does the Salvation Army believe about God and the Christian life?

The Salvation Army’s beliefs are in line with those of mainstream Christian churches. You can read the 11 doctrines of the Army here.

Briefly, we believe the Bible is God’s word and forms the only basis for our faith and living. We believe there is only one God and he only should be worshipped, and that he expresses himself as Father, Son and Holy Spirit.

We believe that God’s creation of the universe was perfect but when man first deliberately disobeyed God, sin and suffering entered the world. As a result, man’s relationship with God has been spoiled.

We believe that Jesus is both truly divine and human. Through his suffering and death on the cross is given the only way by which sinful people - which means all mankind - can be forgiven. When we are forgiven, our relationship with God is put right and we receive new spiritual life. Although this is God’s free gift, we have a part to play in that process - we must be truly sorry for our wrongdoing and have faith in Jesus.

To maintain this new life we must continually have faith in Jesus and be obedient to him. Once we are ‘saved’, God gives us the help we need to live in the way he wants us to.

We believe that our real selves never die but go on living beyond physical death. After this present life we will be accountable to God for how we have lived. Those whose lives have been as God has wished will live with him in eternal happiness; those who have not done so will be unhappy forever because they had no time for God.

Changing social and economic conditions require the Army to take a critical look at, and sometimes review, parts of its structure, patterns of worship and methods of service.

However, these Christian beliefs which form our doctrine are relevant to all generations and point to the unchanging answer to people’s basic need of a right relationship with God.


How does the Salvation Army operate worldwide?

Although The Salvation Army had its beginnings in the East End of London, it has grown into an international movement. There is no continent where the Army is not at work somewhere, and it operates in more than 110 countries.

The Army’s work combines a spiritual and social ministry which takes into account the needs of each particular country. Projects are geared specifically to local requirements and are often run by local people. This is of particular importance in trying to ensure that the spiritual ministry is unhampered by language or cultural barriers.

In many countries The Salvation Army co-exists with non-Christian faiths such as Islam, Hinduism and Buddhism. It respects the sincerely-held beliefs of devout non-Christians, and does not regard conflict or bitter controversy as suitable means to making known the good news of Jesus. It prefers to maintain a clear and consistent witness to the Christian faith, hand-in-hand with a varied social ministry to people, no matter what their race, creed or class.

Salvationists may marry whomever they like - within the laws of the land, of course!

Many Salvationists do marry other Salvationists, one obvious reason being that they meet during the course of Army worship and activities. They feel that to have the same spiritual aims and outlook in life with their partner helps to strengthen their faith and their marriage.

Some Salvationists choose partners who are not Christians and while this may present problems in some marriages, such difficulties are not insurmountable. The important thing is that the couple are comfortable and at peace within the situation.

There are also times when a Salvationist marries a person of another denomination and decides to join their partner in that church.

Originally Salvation Army officers (full-time ordained ministers) were required to marry other officers if they wished to remain in the ministry. But this is now changing, and it will be more possible in the future to find an officer who is married to a non-officer. However, Salvation Army officers still usually marry other officers by choice. This creates a special partnership in ministry, and in local centres in particular this joint ministry can make the work more effective. 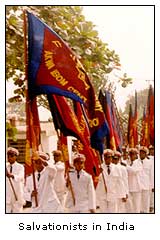 Why does The Salvation Army have a flag? Does it have a special meaning?

In the early days of The Salvation Army over a century ago, it seemed logical that if the Movement was called an army then it should have a flag.

The flag was designed to symbolise the essential beliefs of the movement, and today the design is largely unchanged, no matter in which parts of the world the Army operates.

The flag consists of a blue border surrounding a red background, in the centre of which is a yellow star. The Army’s motto ‘Blood and Fire’ is also inscribed on the flag, as is usually the name of the local centre each flag belongs to.

The blue represents holiness - the holiness of God and the holy lives Christians are called to live. The red is a reminder to Salvationists of Jesus’ blood shed when he was crucified, making it possible for us to live lives free from sin because he died. The yellow star symbolises the power of God’s Holy Spirit. The motto reinforces this symbolism. Salvationists do not regard the flag as sacred but it is thought of with respect because it represents important spiritual truths.