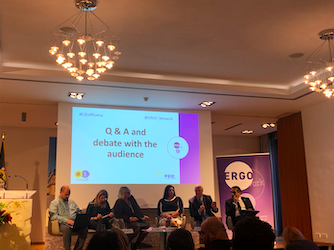 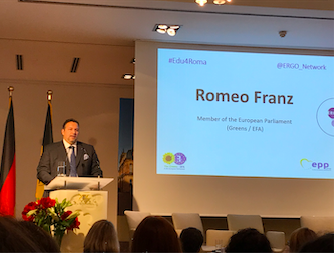 MEP Romeo Franz (Greens/EFA) addressed the attendees next, sharing a heartfelt and solemn story of his grandmother- a Holocaust survivor- who used to wait for him every day outside of his school because of her experience with the SS, who used to arrest individuals when they were leaving school. This poignant, firsthand story drove home the importance of research centres like the one in Baden-Württemberg and the importance of working to eliminate discrimination and racism in all of its forms. MEP Franz elaborated on this point by saying that inclusion strategies do not work if there is no fight to combat anti-gypsyism, which is an incredibly powerful force in Europe at the present time. He emphasised the importance of equal and quality education for Roma children which provides them with a good base for life. This can be ensured by ‘utilising a targeted approach and involving Roma from the beginning in mainstream policies which take their needs into account’. He ended his segment by saying ‘Now is the time to see where mistakes in the past have been made’. Indeed, the development of a post-2020 Roma framework provides opportunities for the European Union to learn from its past mistakes and move forward in a more comprehensive manner. 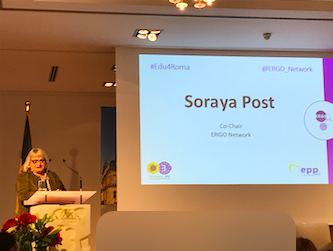 Soraya Post, former MEP and Board Member of ERGO Network, spoke next and shared a story from her childhood, where she was denied education her first year of school until she proved that she was ‘worthy’. This was something that she had to do year after year. Building on this story, Post stated that ‘the right to education should be ours from our first breath’ and that it is the responsibility of governments to take care of their people. In regard to the segregation of Roma in schools, Post asked ‘How can we expect good results for Roma when this is still occurring?’ and stressed the importance of mainstreaming this problem as well as anti-gypsyism. ‘We cannot fight this alone. We have to mainstream this fight, and fight for an equal Europe’.

The second half of the conference featured a panel discussion, where grassroots civil society organisations could voice their needs and opinions of Roma regarding access to quality education. Kadrin Hasanov, Chair of the Integro Association, spoke first, detailing the findings of various focus groups in five countries tasked with evaluating the quality of education in segregated schools. Not surprisingly, the quality of education in such schools is very low and Roma children are not motivated to study. He moved on to speak about some positive developments, including increased number of Roma in higher education in Bulgaria due to scholarships and the existence of programmes to support Roma in completing secondary education. He noted that action is also being taken to bring back students who have dropped out and that more funding for education is being allocated at the national and international levels.

Zuzana Havírová, a member of ERGO Slovakia and a part of the Roma Advocacy Research Centre, spoke next and shared statistics on the share of Roma children involved in designated ‘special’ classes as well as statistics regarding the access to quality preschool education. One barrier she specifically mentioned was a lack of knowledge for Roma parents on how to enroll their children as well as worries that their children will not be happy due to prejudice and a lack of trained teachers in schools. She emphasised the need for state-sponsored initiatives to support schools in building links with disadvantaged parents, as well as addressing issues like transportation fees and the lack of a welcoming feeling for Roma students which may inhibit their desire or ability to attend school.

Aurora Alincai, Deputy Head of Division, Roma and Travellers Team on the Council of Europe, addressed the attendees with uplifting news regarding structural change that the Council of Europe had successfully implemented. This change included a mandate to work with schools to promote Roma representation and language in curricula, which resulted in the inclusion of a textbook segment on the Holocaust in schools in Romania. She also spoke about an existing project with 5 EU member-states that involves the training of teachers and working alongside schools and the government with the aim of focusing on the underlying factors rather than solely on the Roma child. She stated that ‘Making a child feel good in school is not just about providing free breakfast’.

Commissioner Szabolcs Schmidt, Head of Non-Discrimination and Roma Coordination Unit of DG Justice and Consumers, spoke last, emphasising changes that must be made in order for a post-2020 Roma framework to be successful. He stressed that there must be a follow-up to the old framework that involves stronger partnership and is more critical of the set objectives by establishing clear indicators. He closed his segment by saying that ‘Beyond a post-2020 strategy, Europe is not confined to its boundaries. Inclusion efforts should expand to candidate countries as well’.

Considerations for The Salvation Army Network